The analysts in the Biology section focus on analyzing biological evidence seized by law enforcement in criminal cases and perform serological screening and DNA testing on nearly every category of crime: homicide, sexual assault, felony assault, robbery, and burglaries.

We anticipate a busy year of growth and some big changes to our work flow in 2015: expanding our Utah’s Quick Kit (UQuiK) analysis approach to sexual assault kit processing, implementing a new lab-wide Laboratory Information Management System (LIMS), incorporating new automated DNA purification systems and liquid handling workstations along with the newest detection platforms and analysis software in order to continue to deliver fast, accurate, and precise forensic results for all law enforcement agencies within the State of Utah.

The Serology Section detects and identifies biological material (i.e., blood and semen) located on physical evidence in order to:

Analysts in this section document physical evidence, evaluate evidence for the presence of biological materials, and collect and preserve biological samples for future analysis. Analysts select an appropriate test(s) for the possible biological materials involved. These tests may include chemical, enzymatic, immunological, and/or microscopic techniques.

Evidence evaluation begins with a visual examination and documentation of evidence. Biological stains may, or may not, be visible to the unaided eye. Scientists employ the alternate light source (ALS) to visualize biological stains that are otherwise invisible to the naked eye. When viewed in a darkened room with a specialized light source, some biological stains will fluoresce. These stains are then analyzed using the appropriate preliminary and confirmatory tests (test used to identify a specific biological material), as described below.

Analysts operate compound microscopes to search for sperm cells on slides made from swabs, clothing, etc.  The slides are prepared using a staining technique called the “Christmas Tree Stain.” This technique stains the heads of the sperm cells red and the tails of sperm cells green.

If sperm cells are not located, the analyst may perform an immunological test on the stain to analyze the stain for the presence of a protein made in the prostate gland.

materials that do not contain blood may also give a positive result.

Analysts use an immunological test to detect human hemoglobin, a protein found in red blood cells.

Evidence found at a crime scene may be submitted for the collection of skin cells. These items are swabbed and submitted for DNA analysis.

The serology section works hand-in-hand with other forensic disciplines when further analysis is required.  Biological stains are sent to the DNA Laboratory for analysis.  Hairs and fibers are sent to the Trace Evidence Section for comparison.  Also, items are submitted to the Latent Print Section for latent print analysis. 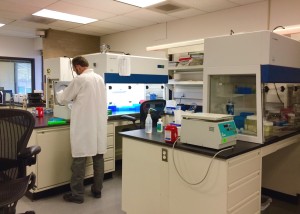 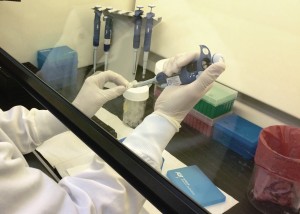 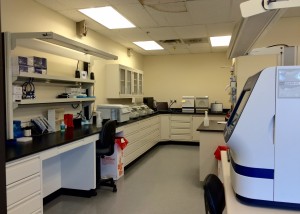 The goal of DNA testing is to identify the source of the biological material. UBFS performs nuclear DNA testing by analyzing Short Tandem Repeats (STRs) through PCR based typing. STRs are short sequences of DNA that repeat a certain number of times. What varies between individuals is the number of times these sequences are repeated. These STRs can be found at specific locations along the chromosomes. Each individual has two copies of each location (locus) examined, one inherited from each parent. They are very discriminatory as the combination of alleles across a large number of loci can be unique to an individual, with the exception of identical twins.

Of the 23 pairs of human chromosomes, 22 pairs are collectively termed autosomal, while the remaining two chromosomes are sex-determining chromosomes. Females inherit two X-chromosomes while males inherit both an X and a Y-chromosome. Y-chromosome STRs therefore allow for selective evaluation of the male component of a mixture sample by only analyzing STRs along the male-inherited Y-chromosome.

be detected with traditional DNA testing methods. Y-STRs are most useful in mixture samples where a minor contributing male profile would otherwise be overshadowed by a predominant female component.

Although Y-STR technology has expanded the types of cases we are able to solve, it has a decreased power of discrimination. The Y-chromosome is inherited as a whole unit and therefore all individuals in the paternal lineage will share the same Y-STR profile, barring any mutation. Y-STRs can be useful to exclude an individual, or include an individual and his paternal relatives.

Utah’s DNA Database originated in 1994 with the authorization to collect DNA from persons convicted of murder and various sexual assault crimes.  Over the years, Utah State Code 53-10-403 et. al. has changed to allow for the collection of DNA samples from the following:

Throughout the State of Utah, law enforcement agencies, jails, and prisons collect around 10,000 samples annually.  Every sample that is legally collected is sent to and processed at the Utah Bureau of Forensic Services.  On occasion a sample may be rejected by the lab for one or more of the following reasons:

Utah’s DNA database is comprised of the State DNA Index System and is referred to as an SDIS lab.  Data that is entered into the database includes the following:

It is important to know that the data within the DNA database is anonymous in that it does not contain any personal information.  The DNA database information is housed on a separate and secure server with restricted access.  Only people associated with law enforcement and the collection of the DNA are allowed to inquire about the status of a DNA sample.  The inquiries do not include releasing the DNA profile, as that is not permitted.  It should be noted that the person of the record (e.g. a person who has given a DNA sample for the DNA database) may request information on the status of a sample.  Any requests must be done in writing and must be notarized.  A request of this nature does not include release of the DNA profile associated with a sample.

DNA profiles in the Utah SDIS are searched at the State level and at the National level (NDIS) if they meet the eligibility requirements.  The Combined DNA Index System (CODIS) is a generic term encompassing the support of the databases as well as the software that is owned and regulated by the Federal Bureau of Investigations (FBI).  The authority and regulation of  CODIS and NDIS is granted through the DNA Identification Act (as amended) of 1994.  The DNA Identification Act defines the parameters of the database and the State of Utah DNA database law closely mimics the applicable sections.

The DNA database is a powerful tool for law enforcement.  CODIS provides a means to search a DNA profile from an unsolved crime against a vast database of DNA profiles in order to find potential matches.

Sample collection for the DNA database takes place at multiple locations within the State of Utah.  Police departments, sheriff’s departments, corrections, and the juvenile justice system all participate in the collection of DNA samples for the state database.  After a sample is collected, it is sent to the UBFS for processing.  Because the DNA profile information does not change over time, only one sample per person needs to be collected.

The Utah Bureau of Forensic Services is currently working with the Utah Department of Technical Services to develop an in-house program to facilitate and streamline the DNA collection process.

DNA database collection laws and protocols vary from state to state.  For example, not all states are collecting from arrestees.  It is also noteworthy to mention that states participating in CODIS do not have access to databases outside of their Local (LDIS) or State (SDIS) database system.

Hits and the database

Searches are performed at local, state, and national levels within CODIS.  Matches or associations made during the search of the DNA database are often referred to as hits.  Verifying the validity of a hit and releasing that information is strictly monitored and controlled by the UBFS CODIS Administrator.  Hits (or matches) that are returned from a search are reviewed for accuracy.  Sometimes a hit will be reviewed by the casework analyst to determine if the hit is a true association.  Hits can occur between a forensic (crime scene) sample and an offender sample (convicted offender or arrestee) or between two forensic samples.  After a valid hit is returned, offender samples undergo a verification process that generally includes sample reanalysis and a fingerprint comparison.  After the verification process is complete, the law enforcement agency is notified of the match, and a new standard is requested for a formal DNA comparison.