“Wherever he steps, whatever he touches, whatever he leaves, even unconsciously, will serve as a silent witness against him. Not only his fingerprints or his footprints, but his hair, the fibers from his clothes, the glass he breaks, the tool mark he leaves, the paint he scratches, the blood or semen he deposits or collects. All of these and more, bear mute witness against him. This is evidence that does not forget. It is not confused by the excitement of the moment. It is not absent because human witnesses are. It is factual evidence. Physical evidence cannot be wrong, it cannot perjure itself, it cannot be wholly absent. Only human failure to find it, study and understand it, can diminish its value.”

Trace evidence is the general term used for the small, often overlooked, pieces of evidence that are left at a scene. The trace evidence section of the forensic laboratory specializes in the analysis of paint, fibers and fire debris. The term does not reflect the amount of that evidence that is left behind at a scene.

The ultimate goal of the trace evidence examiner is to determine whether an unknown sample is similar to a known (a fiber found at a crime scene and compared to a suspects shirt). Determining whether the known and the unknown are similar may help investigators link a suspect, a victim and the crime scene. The trace examiner may also be able to help investigators determine a possible source of the unknown trace evidence if no known samples are available. These investigative leads may ultimately help the investigator find possible suspects and other areas in which a crime took place. 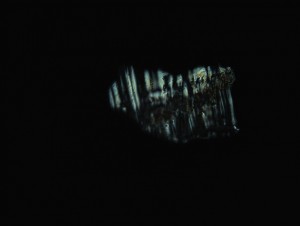 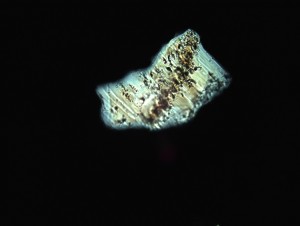 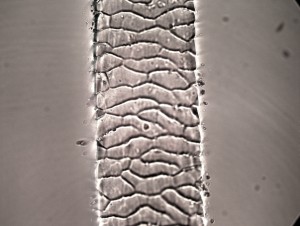 Motor vehicles, structures, tools and other objects frequently have a protective or decorative coating applied either by the manufacturer or consumer that is generally described as paint.

Paint transfers can occur in many instances during the commission of a crime. For example, when a vehicle collides with a pedestrian, paint can be transferred from the vehicle to the victim’s clothing. When force is used to gain access to a building during a burglary, cross transfer of paint can occur. A painted tool may leave paint flakes or smears on a window frame. At the same time, paint from the window frame may transfer on to the tool.

The majority of paint cases submitted to the laboratory involve either automotive paint or architectural paint, but any type of paint or coating could be submitted for examination. The purpose of forensic paint examination is either to compare paint from one source to that recovered at another, or to determine a possible source of a recovered paint by searching a paint database.

Dried paint is usually a combination of organic and inorganic materials and can be comprised of many layers. A forensic paint examiner will use a variety of tools to identify and compare paint samples submitted to the crime laboratory, including a stereomicroscope, polarized light microscope, and analytical instrumentation that can give the examiner distinct information about the paint’s characteristics and composition. Paint examination can be a useful tool in a criminal investigation. 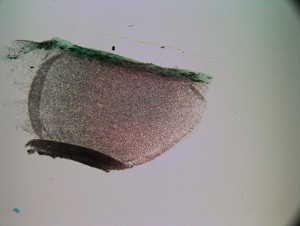 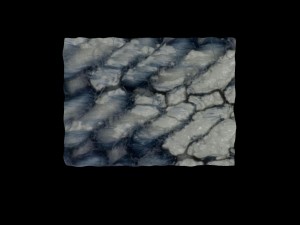 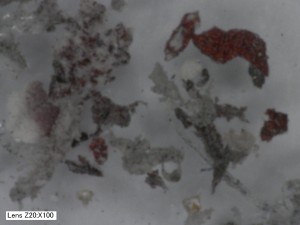 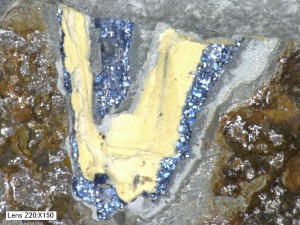 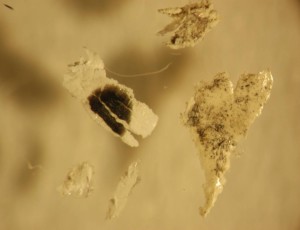 Fibers are everywhere! From the shirt you wore to work today to the blankets on your bed, fibers are in every aspect of our daily lives. Because they are so ubiquitous, they have a high chance of being transferred during a crime. If recognized and collected properly, fibers may be able to link various individuals and places involved in a crime. Fiber evidence is not just restricted to carpets and clothing. Any object that contains fibers is useful for investigative purposes. Some objects that have been tested in the past include: wet suits, window screens, wigs, towels and fishing line to name a few.

The collected fibers are submitted to the forensic lab where the analyst will perform a multitude of analytical tests. The analyst will be able to determine the type of fibers that were collected as well as whether unknown fibers are similar to known fibers of a scene. Determining the types of fibers found may also give an investigator some leads as to what objects were around at the time the crime took place.

The majority of the analyses performed for fibers are done so on a polarized light microscope. This microscope aides the analyst in determining many optical properties of the fibers which in turn helps the analyst identify the fiber type and compare those results to other fibers within the case. 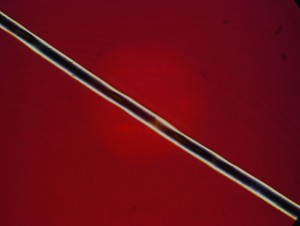 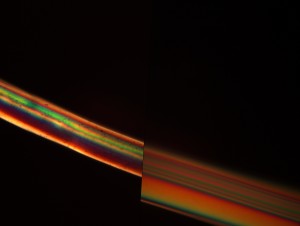 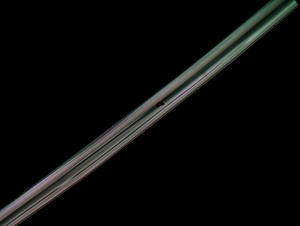 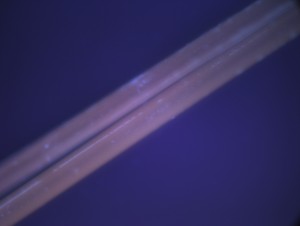 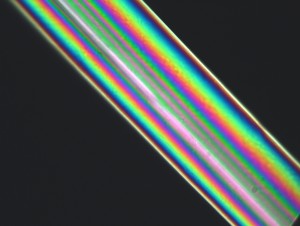 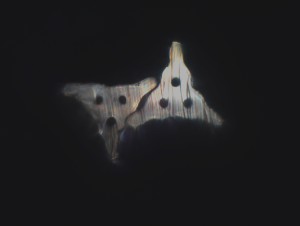 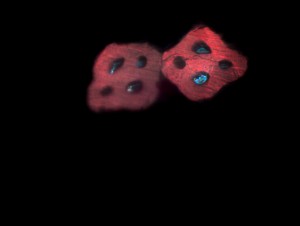 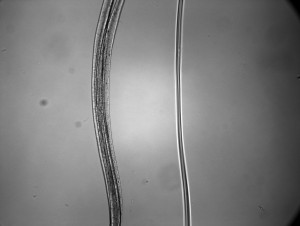 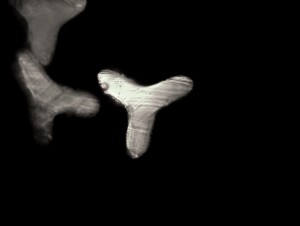 Fire investigators examine clues found at fire scenes to determine how a fire was started. If a fire investigator believes that a fire was started intentionally using an accelerant, then that evidence will be collected and sent to the crime laboratory for examination. Fire debris is the term used to describe the charred evidence collected at a fire scene. Fire debris can retain accelerant residues even after a fire is put out. An accelerant detection dog may be used at the scene to pin point what fire debris should be collected for laboratory examination

In addition to submitting suspected arson evidence, the investigator should submit comparison samples of suspected accelerant liquids and control samples of whatever the accelerant may have been poured on as the background materials can contribute to the data that the examiner sees.

Through analysis of fire debris evidence, the laboratory can provide fire investigators with valuable information regarding the cause of a suspicious fire. 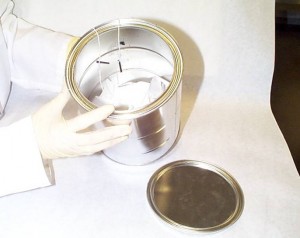 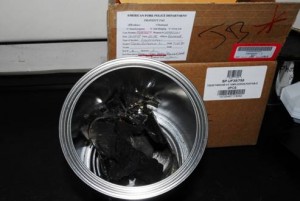 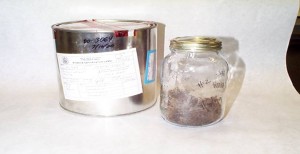 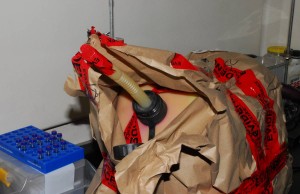 (from left to right: packaging solid in a metal can; liquid in a glass jar; improper packaging of a gas can)

There are times when a piece of evidence at a scene does not fall into the categories of paint, fibers or fire debris.  It’s the unknown piece of black substance or the unknown smear on a tool that may help solve a case.  The UBFS is equipped and ready to help in these situations.  Using some of the same methodologies as the other trace disciplines, these unknown “trace” materials may be characterized, identified and compared to a known sample.  Previous general trace cases accepted by this lab have included: unknown black powders, smears on clothing and residues on tools.  General trace cases and samples are accepted with prior approval from the Chemistry section manager. 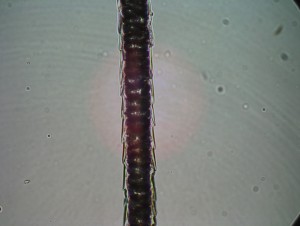 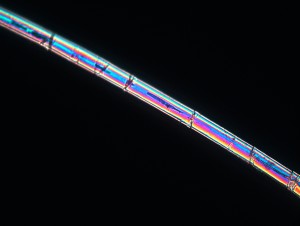 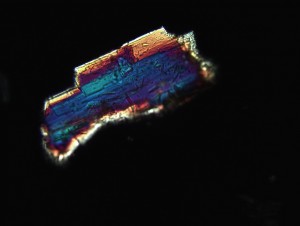